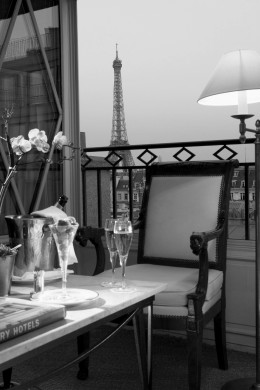 If you’re interested in visiting some celebrity Paris restaurants, this is an excellent place to start, with our top 3 selected celebrity chefs.

Celebrity chefs in Paris restaurants are far from being the household names they are in the States, but there are a few personalities using their fame to attract customers to their establishments… and succeeding! If you’re interested in visiting some celebrity restaurants in Paris, this is an excellent place to start.

Cyril Lignac is a Michelin-starred chef who hails from Aveyron, the birthplace of the accent that is his trademark. He manages several Paris restaurants, and he’s a well-known television personality in France, appearing on several cooking shows including those related to travel in different French regions.

Thierry Marx is a French chef specializing in molecular gastronomy. After training with prestigious names as Joël Robuchon, he opened his first Michelin-starred restaurant, Roc en Val, in Tours. Several years — and several stars — later, he was elected Gault Millau Chef of the Year in 2000. Since 2010, he has been a member of the jury of the French version of Top Chef.

In 2010, Thierry Marx established two restaurants within the Mandarin Oriental in Paris, named Sur-mesure by Thierry Marx and Le Camélia. The former earned two Michelin stars in 2012 for its avant-garde blend of tradition and innovation, with revisited French cuisine like soufflés and mousses, integrating touches of Asian cuisines.

The latter Paris restaurant offers more traditional French dishes incorporating Marx’s unique flair. The restaurant overlooks a peaceful garden, and the Table du Jardin, a unique seating option within the garden itself, is a lovely treat. Be sure to reserve in advance!

Jean Imbert was the winner of French Top Chef in 2012. Ever since, he has co-hosted a television program where he accepts challenges from viewers at home, with such farfetched ideas as cooking only with leftovers, making a three-course meal featuring cheese for a family that can’t stand it, or creating an intriguing magic-themed meal for a magician’s friends.

Jean Imbert owns Acajou, a modern Paris restaurant with a sleek black dining room designed by Pascal Desprez. The menu changes frequently and offers two appetizers, mains and desserts daily. The choices are classic dishes with modern twists and may include the chef’s signature “perfect egg,” fish with cilantro-infused potatoes, or peppermint ice cream with strawberries.

Do you have a favorite Paris restaurant or celebrity chef? Comment below!