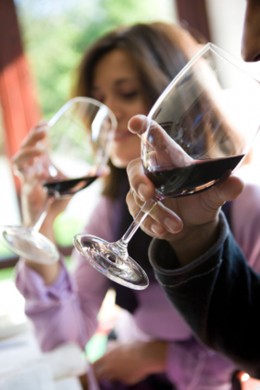 You might be tempted, while exploring Bordeaux wines, to skip St. Julien. After all, it has no First Growths from the famous 1855 Classification, whereas Pauillac to the north has three, and the famous Château Margaux is to the south.

But skipping St. Julien, at 900 hectares (2200 acres) the smallest of the four major appellations of the Médoc, would be a mistake. The northern wines of St. Julien are often said to favor slightly the sturdier wines of neighboring Pauillac, while those closer to the Margaux appellation are more subtle. The combination is delicious. Certainly a well aged Château Ducru-Beaucaillou, for example, can hold its own against any First Growth.

St. Julien has eleven classified estates, including five Second Growths, two Third Growths and Four Fourth Growths, and arguably the highest average quality of fine Bordeaux wines in the Médoc. I’ll list them, together with the cost of a bottle of the 2009 vintage for each wine.

There is wonderful scenery here. As you drive south, there are fine estates along the Gironde River leading to the ocean, and the Ducru-Beaucaillou estate is by common consent the finest in the entire Médoc.  And history is here abundantly.  Château Talbot, in the interior, began as a hunting lodge for Constable Talbot when the English ruled the area during the Hundred Years War. Château Beychevelle, on the river coast, by legend was the property of a French Admiral, and its name reflected the custom of “lowering the sails,” as passing boats honored the resident admiral.

One of my favorite St. Julien wines is Château Branaire Ducru, a tasty wine with just a touch of chocolate. The wine’s fame was enhanced by a Roald Dahl story, “Taste,” in which a wine snob tries to cheat his host with his miraculous ability to guess exact wines and vintages. I enjoyed a fine dinner there one summer. It was fun wandering around the nineteenth century Orangerie, where fruits were grown in the winter.

If these Bordeaux wine prices are daunting, remember that these estates also have second wines, which often are approximations of the grand vins at lesser cost. The “Amiral” of Château Beychevelle, for example, retails at $45 for the 2009 vintage. Similarly, the “Constable” of Château Talbot for the same year averages $34. (And you know about the Admiral and the Constable already.) I am intrigued by a new second wine for Château Leoville-Lascases, “Le Petit Lion du Marquis de Las Cases.“ The 2012 blend of 48% Cabernet Sauvignon, 44% Merlot and 8% Cabernet Franc is said to be lush and intense, costing a more affordable $35.

There are also six Crus Bourgeois in St. Julien, comprising 13% of the appellation’s production, which may be worth seeking out. However, none is as well regarded as Château Gloria, a well regarded (and unclassified) wine which was assembled by the late Henri Martin, who put together this property from some 48 hectares (110 acres). It is a delicious and substantial wine (2009, $54). I recall Mr. Martin fondly, for he presided when I was made a member of the Commanderie du Bontemps de Médoc et des Graves.

My Bordeaux wine tasting memories of St. Julien are pleasant. During a dinner at Château Gruaud Larose a magnum of 1947 Château Talbot was served, to go with the cheese course. It was full and rich, a grand wine, and one of the top dozen wines I have ever tasted. Also, I became quite fond of Château Beychevelle 1980. That was puzzling, for 1980 was said by one and all to be a failed vintage. The winemaker told me that that had been his first year at Beychevelle, and he didn’t want to start off with a flop. So he declassified and sold off as village wine nearly the entire crop – what remained for the Château grand vin was an excellent wine, far superior to most of the 1980 vintage.

With all of this in mind, I am saving a magnum of Château Leoville-Lascases 1975. That was thought to be a tannic vintage requiring long aging – it should be just right in 2025!

What are some of your favorite Bordeaux wines?  Please let us know in the comments section below.