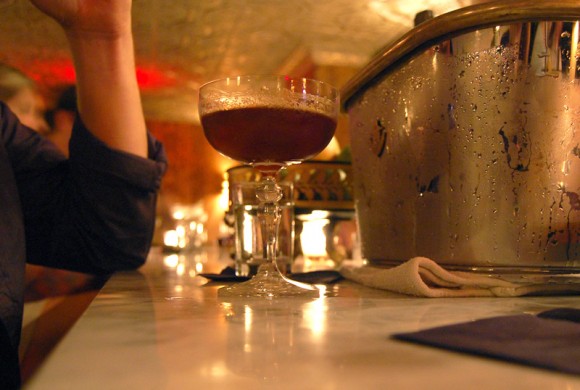 You’ve seen the movie often. It’s 1942, and “Casablanca” is playing. Humphrey Bogart is opening Ric’s Café for an evening’s entertainment. Ingrid Bergman has entered the room, on Paul Henreid’s arm. The café swarms with German soldiers, local riffraff, and others who are trying to make it to Lisbon, and safety. Henreid spots a member of the Resistance and joins him for an aperitif. Sitting down, he orders “Champagne Cocktails.”
It is the most sophisticated moment which we would all like to emulate. But you can’t just copy Henreid. Something different and sophisticated is required.

When you enter your favorite cocktail lounge, order a “Kir ” instead.

Other Versions to Consider

Crème de Cassis cocktails make for tasty aperitifs. And you may find that you share the French view that it is preferable not to start your dinner with a strong drink based on gin, scotch, or bourbon. They may overwhelm the flavor of the light white wine that you serve with the first course of your dinner. Now there are other cocktails based on the Kir formula.

Next time you are at a bar, order some creme de cassis cocktails for friends. They may well be looking for a light, flavorful cocktail with a pedigree, and memories of the Resistance. Paul Henreid would approve!