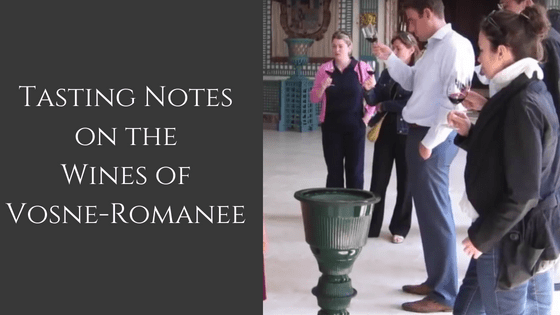 I’ll share my notes from a tasting at the Domaine de la Romanee-Conti estate situated in the Vosne Romanee region of Burgundy.

My private tasting came in 1989, just after the 1988 vintage had been bottled, and just before the bicentennial of the French Revolution. We were at the DRC (Domaine de la Romanee Conti).

And so I had the privilege of tasting these wines where they came from, and in the company of those who actually had produced the wines. The grands crus represented from the Domaine de la Romanee Conti were a spectrum of famous and rare wines, including:

This was also the order of our tasting. I assume that it went from the most accessible in taste and price towards the rarest and most expensive wine selections. I can still remember several of the tastes from that pleasant afternoon. I repeat them in the hope that something of that vintage’s taste might prove characteristic of a given wine. Then we will explore some of the premiers crus and village appellation wines, which are less expensive and still of fine quality.

My notes recall that ten years later, at a dinner in England, we enjoyed a 1988 DRC Echezeaux with a venison dinner. The wine was flavorful, and just sturdy enough to marry well with the venison. I noted that a sturdier Burgundy, perhaps a Chambertin Clos de Beze, would have been an even better match for the venison.

I note that the DRC has a portion of this vineyard (as well as portions of Echezeaux, Romanee St. Vivant, and Richebourg). It has monopoly holdings of La Tache (15 acres) and Romanee Conti (under 5 acres). We have enjoyed from our cellar a fine bottle of 1989 Grands Echezeaux from the esteemed Burgundy producer Mongeard-Mugneret, noting its depth of flavors.

The DRC practice is to sell mixed cases of their vintage wines, with perhaps one bottle of La Tache in the case. The estate owner joked that some purchasers did not realize the value of the DRC’s wine offerings, and chided them from time to time for including “inferior” wines in their case assortment – not realizing that these were some of the finest wines in the world!

I was asked if the Romanee-Conti tasted like a “feminine” wine, and answered that if that was an appropriate comparison, the wine did bring to mind a powerful female like Barbara Stanwyck. For a wine comparison from the Bordeaux region, it brought to mind a Cheval Blanc from the St. Emilion region, of an outstanding year.

The Richebourg turned out to be my favorite wine of the entire tasting. It was smooth, and very elegant. I hope that the 1988 Richebourg in our cellar will be just as memorable. The La Tache had great character, and as a mature wine would go well with game and wild mushrooms. The final wine, the Romanee-Conti, was less accessible than the other wines of the vintage. It was well-proportioned, with a generosity of taste, a wine for decades to come.

Bottles of Vosne Romanee, as you might suspect, are expensive and hard to find. Still, they reward the effort. Recent Washington suppliers had available:

When you can find them, village or regional appellation wines from a good producer offer relative bargains, if that is an appropriate term to use for any Vosne Romanee. Try a 2012 Latour Vosne Romanee ($67).

Better still, join us for a tour of the great wine regions of Burgundy. You’ll taste the grands crus and premiers crus where they are grown and produced. It’s the tasting experience of a lifetime!