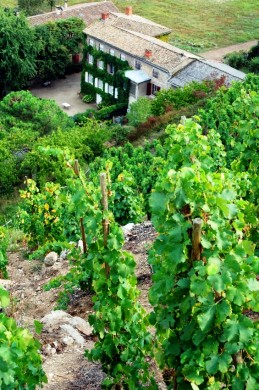 The Rhône Valley of France has two wine regions, distinct in the structure and taste of the wines produced. Terroir accounts for some of that difference, for the wines of the Northern Rhône are grown on narrow strips of land set precariously on sharply descending slopes. These wines are complex and reward long aging. The 2007, 2009 and 2010 vintages were all acclaimed for high quality in both regions.

The Northern Rhône region begins south of Lyon at Condrieu and Vienne, and continues for some 40 miles to Cornas. It’s region includes Hermitage, Crozes Hermitage, St. Joseph, Côte Rotie, and Cornas. The Syrah grape is king for red wines, while the white Viognier grape, now prospering elsewhere, clings to a precarious hold in the Condrieu region.

Hermitage is well known but not often tasted. It is expensive, and made from 100% Syrah grapes. I have tasted a Delas Hermitage Les Bessards 2004 ($120), an unfiltered wine made from over 50 year old vines, which was profound. It would go perfectly with venison. For a less expensive treat, try Guigal’s Croze Hermitage Rouge (2007, $21), an elegant example of a good Northern Rhône with a Syrah base. I have also enjoyed the Domaine de Remizières Crozes Hermitage, whose 2010 is reasonably priced at $22.

A treat if you can find them, Côte Rotie wines of the Northen Rhône are on the steepest slopes, and only total a few hundred acres of vines. They are said to go perfectly with steak. Viognier grapes are also added in the proportion of 20% to 80% Syrah to make the Côte Rotie wine blend, adding character and flavor. A Guigal Côte Rotie 2003 ($82) that I once tasted was a revelation, a very deep and flavorful wine, full of character.

In Cornas, the Domaine Clape wines set a quality standard. They are expensive, reflecting the small vineyard and careful production, and the well regarded 2010 and 2009 each retail for over $125, if you can find them. Fortunately there is a second wine, Clape Cornas “Renaissance,” made since 2008 at half the cost, which is produced from younger vines. It has been acclaimed for its aromas and flavor. If that is still too costly, try the Michel Cornas (2010, $35) which is said to have a pleasing blackberry flavor.

I would add that the St. Joseph wines of the Northern Rhône deserve to be better known. They are far less costly than Hermitage and some say equally flavorful (St. Joseph 2007 Guigal $30).

The Viognier grape now flourishes in Virginia, where it has been chosen as the state’s official wine! It is the grape from which Condrieu wine is made. Guigal (2009, $47) makes a fine, flavorful example. I tasted his 2005, which was superb, smooth and succulent. It just kept coming on, with waves of flavor. This wine would go nicely with a firm fish, such as swordfish or rockfish, and it is far less expensive than grand cru white Burgundies. The smallest French classification is said to be Château Grillet, which produces a white wine from Viognier grapes on its six acres, but at $165 for the excellent 2010 ($125 for the 2009), I suspect that Condrieu from a good producer such as Guigal is the better bargain.

These are samples of the undiscovered wine treasures of the Northern Rhône. Join us next for some fine wines from the sunny Southern Rhône, the land of affordable Côte du Rhône and delicious Châteauneuf du Pape wines!

Have you traveled to the Northern Rhone? What is your favorite wine from that region? Please comment below!