Barolo vs Barbaresco: How To Tell the Unique Differences 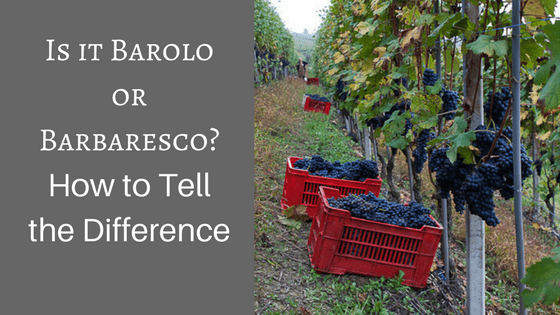 Barolo vs Barbaresco: How to Tell the Difference

Let’s examine the question: “Barolo vs Barbaresco, how do you tell them apart?” They are nearly identical twins from the Piedmont region, so it can be a challenge. The differences are subtle.

Here are the top 5 differences between Barolo vs Barbaresco:

Barolo vs Barbaresco: They are both:

Barolo vs Barbaresco: Details to tell these two wines apart

Five aspects of where the Nebbiolo grape is grown and how the wine is made explain the subtle differences between these two wines. Mother Nature is the most important factor. The Nebbiolo grape is highly sensitive to its growing site. The disciplinare (regulator) also plays a key role setting official rules and guidelines for each Italian appellation.

1. Soil: There are two main types of soil in the area of Piedmont where Barolo and Barbaresco are situated.

Barolo is situated at a slightly higher altitude than Barbaresco. In Barolo, winegrowers are required to plant vines between 500-1,800 feet. In Barbaresco, where the hills are on average 150 feet lower than in Barolo, grapes are planted between 500-1,150 feet on south-facing slopes. The term “bricco” is often attached to the names of vineyards planted in premier hillside locations. “Söri” describes a well-exposed sunny site.

3. Weather and Vintage Variation. Related to altitude, Barolo is slightly cooler than Barbaresco. It is somewhat more difficult for Nebbiolo to ripen in Barolo. Nebbiolo ripens more consistently in Barbaresco.

In addition to the above is the difference in mouthfeel:

Given today’s diversity of winemaking styles, however, these generalizations may not hold up.

Aging Vessels. Now it’s the winemaker’s turn. Building on Mother Nature and disciplinare requirements, a winemaker’s choice of aging vessel contributes to the style of the wine.

Wine labels only say “Barolo” or “Barbaresco” DOCG. The name of the Nebbiolo grape never appears. In the past decade, a new system has been developed that resembles the Cru system for quality designations used in Burgundy, France. Called Menzioni Geografiche Aggiuntive (MGA), the system regulates use of town and vineyard names on labels in Piedmont and Liguria. There are 181 MGAs in Barolo, and 66 MGAs in Barbaresco.

Interested in learning more about Italy’s wine classification? Check out our post: Are You Confused by Italian Wine Labels? Helpful Professional Tips

There’s no contest: wine from Barolo is the king of Italy, and Barbaresco is its queen! Enjoy comparing Barbaresco vs Barolo and see their subtle differences on your own. Or join one of French Wine Explorers’ tours to Italy!

Sign Up for our eNews articles and promotions and receive our Free Guide to Wine Tasting Like a Pro!