How to Demystify Bordeaux: Best Bordeaux Wine by Region 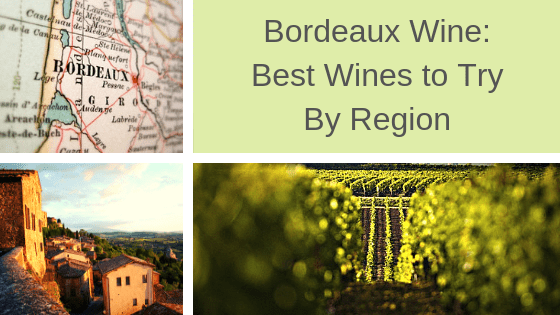 How to Demystify Bordeaux: Best Bordeaux Wine by Region

For all of its beauty of variety and lasting history, Bordeaux wines can be a complex subject. Let’s break Bordeaux wine down to better understand the nuances of the major wine regions of the area, and to offer you the best Bordeaux wine choices by region.

Bordeaux is France’s fourth largest city. It has the largest controlled wine growing region in the country, known as an AOC, meaning  appellation d’origine contrôlée. Bordeaux produces close to 70 million cases of wine per vintage. While best known for its red wines, there are a number of whites worth noting in Bordeaux as well.

This post is to distinguish the varieties of Bordeaux wine. We have organized this list of best Bordeaux wine by region with further descriptions of appellations and growths. An “appellation” refers to a geographic area where grapes were grown to produce a specific wine. Wines distinguished by “growth” refer to wines awarded in 1855 when wine brokers from Bordeaux ranked all of the chateaux in the area. Estates were awarded from First Growth, being the best, through Fifth Growth. All these years later, the classification remains an indication of impeccable wines. A Grand Cru is a title specific to the best Bordeaux vineyards, translating directly to “great growth”.

The regions we will focus on start on the left bank of Bordeaux in Médoc, moving east to Graves, Saint-Émilion, and finally Sauternes.

The Médoc and Haut Médoc sit to the west of the Gironde river. There are eight appellations in the Médoc: Médoc, Haut Médoc, Saint-Estèphe, Pauillac, Saint-Julien, Margaux, Moulis, and Listrac.

The Médoc is the terroir par excellence of Cabernet Sauvignon. Cabernet Sauvignon is used in the majority of wines of this region, blended with lesser amounts of Merlot and Cabernet Franc. To give a more in-depth analysis of the large region of the Médoc, here are the four appellations in the Haut Médoc that produce Grand Crus wines, moving from north to south: Saint-Estèphe, Pauillac, Saint-Julien, and Margaux.

In the Médoc: Saint-Estèphe

Saint-Estèphe sits on the northernmost segment of the Médoc region. Wines are well regarded by connoisseurs around the world. Though there are no first growths in this region, these wines are notable for their depth in taste and have earned many other awards in their own rite.

In the Médoc: Pauillac

Of the world famous 1855 Classification, Pauillac has eighteen classified wines. Pauillac lies between Saint-Estèphe and Saint-Julien, and perhaps that is why the taste of wines produced in this hamlet vary so greatly. Pauillac means quality wine. Since it is expensive, a buying strategy is needed. We recommend to buy a bottle or two as a special treat, and save them for a fine occasion. Be sure to also watch for Vintage Dinners stateside. These dinners are somewhat pricey – but cost nowhere near what the wines being presented would cost by themselves. You might even discover a bargain!

In the Médoc: Saint-Julien

You might be tempted while exploring Bordeaux wine to skip Saint-Julien since it has no First Growths from the famous 1855 Classification. But skipping Saint-Julien, at 2200 acres, the smallest of the four major appellations of the Médoc, would be a mistake. The northern wines of St. Julien are often said to favor slightly the sturdier wines of neighboring Pauillac, while those closer to the Margaux appellation are more subtle. The combination is delicious. There is wonderful scenery here to enjoy as well. As you drive south, there are fine estates along the Gironde River leading to the ocean, and the Ducru-Beaucaillou estate, considered the finest in the entire Médoc. A well aged Château Ducru-Beaucaillou is considered to hold its own against any First Growth.

The highlight of your trip to Bordeaux may be discovering the wines of Margaux. Margaux is the largest of the six regions of the Médoc, and the farthest south. The lucky 1,479 people who reside there live in one of the most famous wine making regions on earth. The rest of us can profit from the legendary hospitality of the wine estates, which welcome visitors. Leading grapes grown are: Cabernet Sauvignon and Merlot,  followed by Cabernet Franc, with traces of Malbec.The wines are on the lighter side, but fragrant and flavorful.

Outside the Medoc: Graves

Graves sits on the left bank of Bordeaux. This region is named for the gravel soils native to the region, which contribute to the unique flavors of wines. Graves is distinct for producing both high quality red and white wines. Bordeaux white wines are almost always a blend of Semillon and Sauvignon Blanc grapes. This blend requires the winemaker’s distinct craft to develop a captivating wine. Sauvignon Blanc has a high sugar content, yielding a fresh, fruity flavor. Semillon tends to add finesse and balance.

Best Bordeaux Wine Outside the Medoc: Saint-Émilion and Pomerol

Merlot is king on the right bank of the Garonne where we find the appellations Saint-Émilion and its satellites, Pomerol and Lalande-de-Pomerol. Merlot produces wines that are round and supple while easier to drink in their youth than the reds of the Médoc. Cabernet Franc is the other grape used, sometimes in equal quantities as Merlot. Cabernet Sauvignon is sometimes used in some Saint-Émilion vineyards, and in small quantities in some Pomerol vineyards. To the west, the small area within Pomerol of Libournais has estates with an average size of only 17 acres.

Located primarily on the hillsides and plateaus of the Dordogne Valley, the 13,350 acres of A.O.C. Saint-Émilion have quite diverse soil types: gravel, clay, rock fragments and sand, all on a limestone base. The diversity of the soils gives rise to a great diversity of style in the wines. The wines of Saint-Émilion are generally round and rich, with a good structure from very fine tannins.

The Pomerol vineyards were planted in the 1700s, but the wines started to gain notoriety only in the mid-1800s. Pomerol has a hot microclimate, so the harvest often takes place as much as two weeks earlier than in Saint-Émilion. The soil is mostly clay, a cold soil that is perfect for the early ripening Merlot because it helps the grapes to ripen gradually and evenly and holds water in hot conditions. The wines of Pomerol are powerful, aromatic and round, with aromas of very ripe red fruit and often a gamey or leathery note. With age, they take on characteristic aromas of truffle and forest floor.

Sauternes, a dessert wine with varying sweetness, was one of the world’s favorite wines a century ago. They fell out of favor when people started watching their waistlines, but are now making a comeback. A little goes a long way, so I recommend starting with half bottles.

These wines are late harvested, when mists are created in the humid fall, causing a mold to attack the grapes. The trick is to harvest the grapes, which will look like raisins, at exactly the right moment. If you don’t harvest them in time the grapes become useless. It is a highly skilled, and labor intensive process. A string of fine recent vintages, including 1999, 2001, 2003, 2005, 2007, 2009 and 2010, offer particularly exceptional wines.