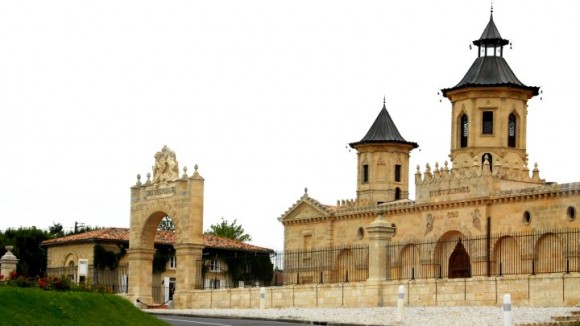 St Estèphe wines, from the northernmost segment of the Médoc region which is north of Bordeaux, are well known by wine connoisseurs. It is a pretty region, ranging along the river, and it is rife with history. These wines are said to be deeper than neighboring Pauillac, perhaps because the region has more clay subsoil (like Pomerol) and less gravel.

The chateau has a rich history, mirroring the supple wines produced here, which gain in concentration from long cellaring. I once asked Bruno Prats, then the owner of Château Cos d’Estournel, when his family drank their own wines. He said without hesitation, “We wait a dozen years for a bottle, and twenty for a magnum of wine.”

He clearly favored the taste from a magnum, as did most of the Bordelais wine families that I knew.

History is still living here, with its quirky results. The owner of Château Calon Ségur, for example (“calon” is a local word referring to a dugout canoe, years ago a popular means of transportation on the river), in discussing the 1855 Classification with me, said that there had been several bad harvests at that time, which directly affected the property’s showing. Even worse, a former owner had just sold off the property that became the Second Growth, Château Montrose!

And so, probably for all time, Château Calon Ségur will have its Third Growth classification, and its owners a nagging sense of what-might-have-been!

Château Montrose, with a favored location on a hillside overlooking the Gironde River, is a deep wine, best consumed in magnums. It used to be called “the poor man’s Château Latour,” due to a taste many perceived to be deep and rich, like that Pauillac First Growth.

Fortunately for the wine consumer, St. Estèphe is rich in another classification, the Crus Bourgeois. Started in 1934, revived and then the subject of successful lawsuits after the 2003 reclassification, it has riches to be discovered in the Cru Bourgeois classification (which, by a decision in September 2014, the hardy members of the Alliance du Cru Bourgeois du Médoc intend to revive for 2016, when the 2014 vintage will hit the American market).

Here, there are bargains for the wine lover.

How many St Estèphe wines have you tasted? Which were your favorites? Comment below!