Riesling Wine: The Sweet Side of Life 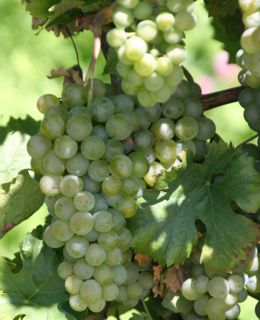 Readers will recall that my fondness for the Riesling wine of Alsace began at Riquewihr, when I enjoyed cool Sylvaner wine in a chilly cave of the Hugel firm one sweltering August.

Riesling wine has another pleasant association for me, when my family first shared my enthusiasm for Alsatian wines. It was at an Alsatian restaurant in Paris, just a few yards from the bridge that separates the Ile de la Cite from the Ile St. Louis. The restaurant was bustling with customers. One waiter, trying to balance two trays of choucroute garnie and a pitcher of chilled Riesling wine, called to the crowd waiting for tables, “Laissez passer le beau garcon!” We were charmed, and have called the restaurant, still flourishing as the Brasserie de l’Isle St. Louis, the “Handsome Waiter Restaurant” ever since!

Riesling is becoming better known in the United States, although it is far from a familiar wine grape. Surely Chardonnay has more fans, and probably Sauvignon Blanc as well. But it is a noble grape, one with a long history of cultivation. Furthermore, it has an assertive flavor that goes well with many foods. It has even made my short list for serving with that perennial mystery, the Thanksgiving turkey!

Its home is Alsace and Germany, so we’ll savor several varieties of the Riesling wines, from both sides of the border. As a bonus, it seems that warmer temperatures have recently produced excellent vintages in a climate that in the past was often cool and rather chancy.

Riesling is also made as a dessert wine, from late harvested grapes (such as the selection de grains nobles offered by several Alsatian winemakers).

Across the Rhine, Riesling wine can taste like a different grape varietal entirely, as I was surprised to discover when sampling these wines recently for my wine tasting class. In part, this is due to differences in soil and climate in Germany, and to oak aging being rarely used. But mainly, the difference is due to the fact that German Riesling wines have their own classification, in which degrees of sweetness of the wine plays an important role.

It ranges from the semi-sweet Kabinett, then to the Spatlese (“delayed harvest”), which are picked seven days later than the normal harvest date. German classifications continue on through several very sweet late harvest wines (Auslese, Beerenauslese, and Trockenbeerenauslese). And so, with a Kabinett German wine, you start with a wine noticeably sweeter than an Alsatian Riesling.

And so our tasting led to some new Riesling wine discoveries. If sweeter wines are your preference, there are discoveries to be made here.