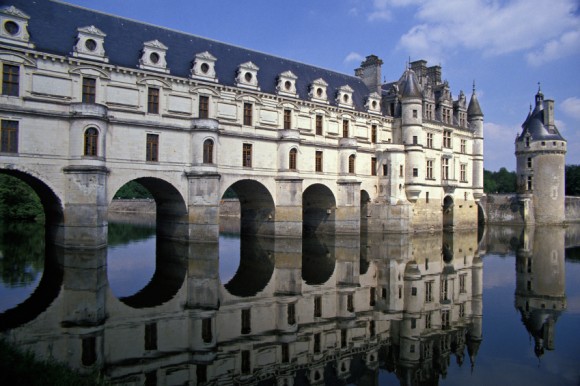 Loire Valley Tours offer a world of enchantment, which I first explored on a bicycle tour many summers ago. Returning a few years later, when I was teaching at a boys’ lycée at Châteauroux in the nearby Indre département, I interpreted for tours held for the U.S. Air Force to several dozen world famous châteaux. The favorites we visited are still drawing large numbers annually, and you’ll want to see them – Chenonceau, Azay-le-Rideau and Chambord. You will want to make sure and see them and they are popular on many types of Loire Valley tours.

Chenonceau wins for sheer elegance and beauty. It is in the Indre et Loire not far from Tours, and its most striking feature is a galleried bridge over the Cher River. This château came into the hands of the royal treasurer in the early 16th century, when an earlier property was pulled down (except for a castle keep which the new owner redesigned with an elegant chapel). In 1515-1521 the imposing new structure was built in Italian Renaissance style. It entered history perhaps when King François I seized the property in 1537 for unpaid debts.

This royal property was gifted by King Henri II to his mistress Diane de Poitiers, and she commissioned a bridge across the Cher of the Loire Valley as an extension of the château. Payback time came with the death of the monarch, when his widow, Catherine de Medicis, forced her rival out of the château. Catherine added the gallery to Diane de Poitier’s bridge. This elegant addition proved the survival of the castle, for during the French Revolution, a later owner saved it from destruction by telling the mob that the “bridge” was the only river crossing within miles!

Azay-le-Rideau, also in the Indre-et-Loire, is a jewel, built 1515-1527 in Italian Renaissance style on an island in the Indre River of the Loire Valley, from which it seems to rise, occupying the space of a former feudal castle. A favorite residence of François I, it bears the royal symbol of that Renaissance monarch, the salamander! The writer Balzac lived in the vicinity, and Louis III and the “Sun King” Louis XIV each stayed here. Its main feature is a grand central staircase with three floors, and a mezzanine looking over the courtyard.

Chambord, by contrast, is on a magnificent scale, a vast hunting castle built in the Loir et Cher by François I in French Renaissance style over a medieval base. It is the largest château in the Loire Valley. Aside from its imposing façade, with over 800 sculpted columns, its main feature may be a three story open staircase with 274 steps, which was possibly designed by Leonardo da Vinci. Art treasures of the Louvre, including the Mona Lisa and the Venus de Milo were safeguarded here during the Second World War.

Loire Valley tours offer so much to visitors, and the chateaux are for some a highlight of the tour. Chenonceau, Azay-le-Rideau, and Chambord are great treasures of the Loire Valley, and memories of these chateaux will stay with you long after your Loire Valley tour. You’ll surely also sample the elegant light white and rosé wines when you visit. (Chenonceau has its own wines for sale.) Make yourself one promise – return to Chenonceau for the evening performance, the son et lumière. What is beautiful during the day becomes an enchantment, illuminated with music on a summer evening.