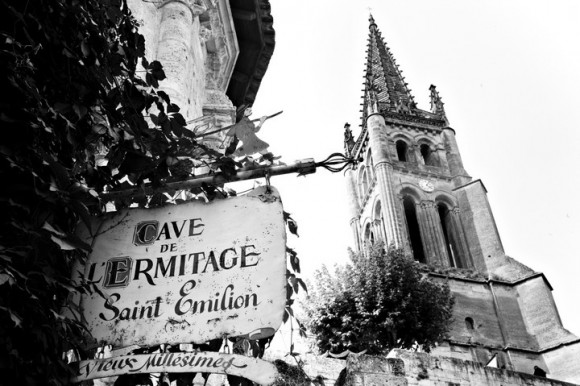 Wine tours to Bordeaux are not complete without a visit to St. Emilion. The perfect Sunday excursion from Bordeaux is to drive an hour and a half through the countryside to St. Emilion. Enjoy the scenery of the town and its wine estates, and then savor a leisurely luncheon in the old hilltop town, one of the most historic and scenic wine regions of France.

Most of its finest wine estates are either clustered on the hilltop plateau, cradling the historic town itself with its winding streets and breathtaking churches, or on the hillside slopes. Exceptions to that rule are the two grand St. Emilion estates that are on the neighboring Pomerol plain, Château Cheval Blanc, and Château Figeac.

In tracing the great estates of St. Emilion, your route is essentially circular, around the town itself. Be sure to leave lots of time, though, for exploring St. Emilion itself on foot. It would be a shame to miss the underground church carved from stone, let alone the Maison du Vin with its fine selection of less expensive St. Emilion wines. And do notice the evocative standing gothic church wall of a ruined church as you enter town. Instead of pews, there are grapevines, for this is the scenic vineyard of the grand cru Château Grandes Murailles.

The Bordeaux classification of 1855 was silent on the wines of St. Emilion and Pomerol, probably for reasons of commercial jealousy. The wine merchants of the Médoc controlled the selection of wines that were classified for the 1855 Exposition in Paris. They were not about to give equal consideration to their rivals from across the Gironde River. Read more regarding Bordeaux First Growths.

Now, St. Emilion has its own classification, and at the top of the list of premier grands crus classés are two wines in their own subcategory A: Château Ausone and Château Cheval Blanc. They could not be more different, by style or flavor, and they could not be farther from each other and still be St. Emilion wines. But they are each superior, and Alexis Lichine’s judgment that in a revised 1855 Classification that would rank the thousands of Bordeaux wines by merit, both Château Ausone and Château Cheval Blanc would be in the top eight, with Chateau Petrus of neighboring Pomerol, and the five leading wines of the Médoc and the Graves, surely has stood the test of time.

I recall with great pleasure drinking an 1845 Château Ausone that the owner served for luncheon at the château. It was too old to be decanted until moments before it was served. A superb rich wine, it was recognizable as an Ausone to anyone who knows the wine. As I savored the wine, I couldn’t help but think that this vintage wine had spanned all of France’s modern history. When the vintage was young, it was enjoyed by people who had lived through the French Revolution. And here I was, now enjoying the same wine a century and a half after the vintage.

The wine is distinctive, with breed and a touch of something earthy, a perfect wine to serve for a memorable occasion. The wine definitely does not blend into the background. It is not unlike Château Haut Brion in that regard, while lacking perhaps something of the latter’s elegance. I like to think that Château Ausone is a country aristocrat, while Château Haut Brion is a country aristocrat dressed for Paris. There is a second wine, La Chapelle d’Ausone, which recalls the early religious murals that have been found in Ausone’s wine cave.

La Jurade was actually reinvigorated after the Second World War. Jean Capdemourlin, while a prisoner of war, spent his long hours imagining how to improve his beloved home town, St. Emilion. After the war, in 1948, together with Friar Berget, Daniel Querre (Château Monbousquet), and Mr. Dubois Challon (Château Ausone), he revitalised La Jurade de St. Emilion, now the oldest wine fratenity in the world. His son Jacques Capdemourlin has carried on the tradition, and now presides as Premier Jurat over dinners of La Jurade.

In honor of St. Emilion, our wine tours in Bordeaux reveal what makes this Bordeaux wine region so special.

In the meantime, why not try a bottle of the flagship Château Balestard la Tonnelle, the excellent grand cru wine produced by Capdemourlin estates? The property is on the edge of the village, and the wine is composed of 70% merlot, 25% cabernet franc, and 5% cabernet sauvignon. The tower referred to in the name of the wine is a 16th century observation tower, erected for military use. And each bottle of this excellent wine carries on the label a poem by the great fifteenth century poet, François Villon. He laments that he cannot afford that “divine liquor,” Château Balestard. Now at $38 per bottle for the 2008 vintage, I hope you will be able to enjoy what he could not!