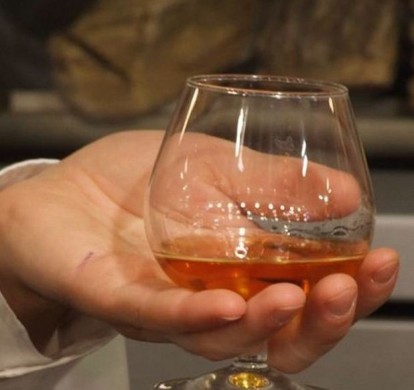 Fine dining doesn’t end at the dessert course. If Armagnac or Cognac is being served, your guests have a further treat in store. But have you tried festive French fruit brandy, another range of after dinner drinks, to savor with your coffee?

Fruit brandy (often called eaux-de-vie) are colorless and full of flavor. They are a specialty of Alsace, and are often served in short, thin glasses. However, you might try serving them in traditional cognac glasses, for the brandy will gradually warm from your cradling hand, releasing more fruit flavors, with their characteristic aromas. As with Armagnac and Cognac, a little goes a long way.

These fruit brandies are usually marketed in tall, slim bottles, a smaller version of the typical Alsatian wine bottle. They are distilled from fruits, and the rarer the fruit, the costlier the fruit brandy. They are named according to the fruit from which they are distilled.  Popular examples would include fraise (strawberry), framboise (raspberry), kirsch (cherry), poire or Poire William (pear, the latter with an actual pear in the bottle).

The fermentation and distillation process has been well summarized by a leading Alsatian producer, G.E. Massenez. They state that fruits with stones and seeds are placed in tanks, and allowed to ferment as the fruit is compressed under its own weight, producing alcohol from the sugar of the fruit. Berries, on the other hand, have less sugar content (so less alcohol would be produced by fermentation), and so they macerate in an alcohol solution for at least a month (alcohol is colorless). Distillation proceeds in copper stills which are heated in a double boiler through which steam circulates. The middle of the run—or “heart”—is the best.

Let me mention a separate category of colorful fruit creams, of which cassis (blackcurrant) is a fine example. They are mildly alcoholic, and can pep up tired champagne, as well as being a satisfying addition to ice cream! When you are unhappy with your white wine, add a jigger of cassis. The result is a highly satisfying kir (kir royale if made with champagne). For some reason, this goes better with Chardonnay than with other white wine grapes. We have enjoyed Mathilde Liqueur’s cassis ($12.50 for a half bottle), and are now trying the framboise.

Cordials (or liqueurs) are also distilled spirits, usually on the sweet side. They probably started out centuries ago as herbal medicines, and their complicated formulas are usually trade secrets. Some of them are very well known. Cointreau is a quality cordial made according to a secret formula for over 150 years. The peels of imported sour and sweet oranges are the basis of the fruit essence. As with other cordials, it is also an ingredient in a number of mixed drinks, of which the Side Car may be the best known (2 parts Cointreau, 1 part lemon juice, 4 parts Cognac- mix in a shaker with ice).

Chartreuse and Benedictine liqueurs have colorful histories made from a selection of secret ingredients. Chartreuse comes in green and yellow varieties, and its recipe is said to be at least four centuries old. Benedictine is made from 27 plants and spices. It is also said to be an ingredient in a famous long drink, the Singapore Sling, first served in 1915 at the Long Bar of the Raffles Hotel in Singapore by the bartender, Ngiam Tong Boon.

Complicated blends can also occur. Grand Marnier combines distilled spirit with cognac, as does B and B (Benedictine and Brandy). The more exalted the ingredients, the pricier the drink. In any event, the choice is yours!

Tell us about your own discovery of new cordials or fruit brandies below!