Cognac vs Whiskey: 4 Differences To Help You Choose The Best 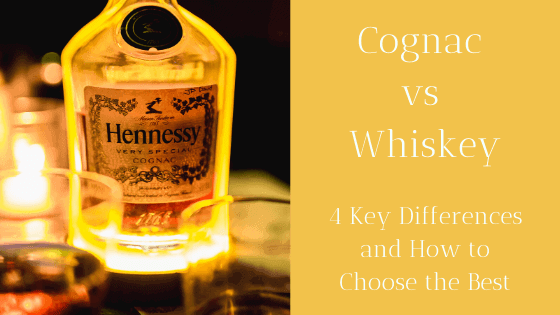 Cognac vs Whiskey: 4 Differences To Help You Choose The Best

When it comes to choosing a spirit to drink, the choices are plenty. Choosing the best one can be a daunting task thanks to the many options available today. Today, the comparison between Cognac vs whiskey dominates a majority of late-night conversations. The fight between the two drinks is older than the drinks themselves.

Let’s recap the 4 differences between Cognac vs Whiskey:

Are you confused between Cognac vs whiskey? Are you wondering how they are different? If yes, then read further to find out everything you need to know to appreciate their differences.

The eternal battle: Cognac vs Whiskey

When it comes to the two spirits, there are many similarities. But they are wildly different from one another as follows:

Both whiskey and Cognac are widely popular today. There are similarities in how they age in wooden barrels, and the longer they age, the smoother the taste. But, the spirits can differ in terms of the base product, terms used to define the age, the distillation process, and even the geographical boundaries. While people’s preferences may differ, you can enjoy whiskey and Cognac equally once you know what type of each you prefer.