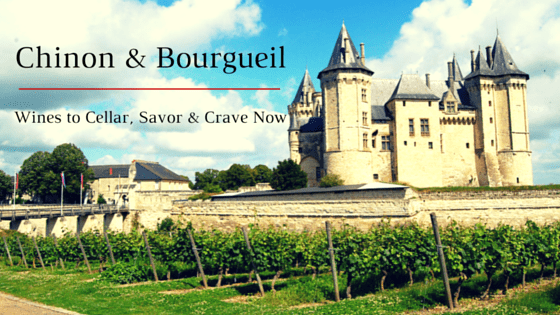 When you are in the beautiful Loire Valley, you are never far from history. That is certainly true in the Central Loire town of Chinon. The Castle of Chinon traces at least to the eleventh century, and is cited throughout the history of both England and France. It was the property of Henry II, (“The Lion in Winter”), the first Plantagenet ruler of England. Several centuries later it was visited by Joan of Arc. In the early fourteenth century, the French Pope held court there in deciding the affair of the Templars, as the French nation became covetous of the Templar riches. Today you may visit the Castle of Chinon and savor its rich historical past.

But that is not the only castle in the Chinon region.

Bourgueil in the Central Loire Valley is Chinon’s neighbor. It is also known for producing excellent red wines from the Cabernet Franc grape.

For a start, as their red wines become more carefully made, the Loire Valley red wines have now begun to rival sales of the summer wine king, Beaujolais.

But why not go further than that? Other wine growing regions, inspired by the Bordeaux example, and particularly by the prices currently commanded by premium Bordeaux wines, have decided to concentrate on qualitative improvement. Tuscany is a prime example. Some areas, such as the Duoro of Portugal, now feature improved red wines –made by winemakers from Bordeaux! The Cabernet Franc grape has greater nobility than the Gamay, which is the grape of Beaujolais. Could a carefully crafted made Cabernet Franc red wine from the Loire Valley rival the famous blended wines of Bordeaux?

That is what careful winegrowers are struggling to discover. For now, try a 2014 “La Chaneleuserie” from Bourgueil ($17). It is full of flavor, with a fine potential for aging. And who knows, in this beautiful and historic region of the Loire Valley, you just might discover a fine Cabernet Franc wine that deserves to be better known!