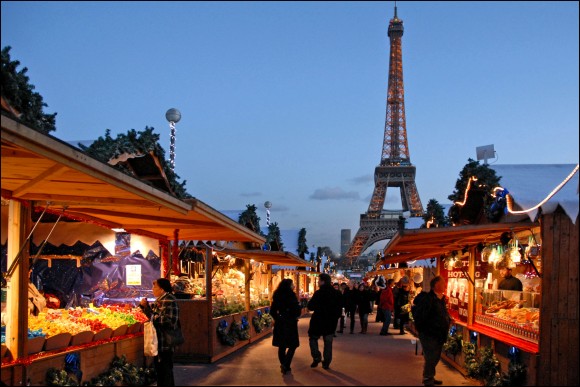 When you visit Europe at Christmas, you may be struck by what appears to be a discernible lack of Christmas joy — from an American perspective, at any rate. There is very little Christmas music in supermarkets and restaurants, and while you’ll see twinkle lights nearly everywhere in Paris, the décor tends to start and end there. But that’s not to say there aren’t other ways of celebrating Christmas throughout Europe and in France especially —Paris Christmas markets.

You’ll find holiday markets throughout France and Europe. The Paris Christmas markets tend to be less Christmassy than some in Germany and Central and Eastern Europe, with stands devoted to tea, carved wooden baubles, clothes and specialty food items far more common than those selling Christmas decorations. But there’s usually Christmas music, an opportunity for kids to meet Père Noël, and quite a few lovely nibbles to try.

This is one of the largest Christmas markets in Paris, and given its location, it’s also one of the most frequented. A lot of the stands you’ll find are selling the same things, but it’s nice to wander through and take a look — and once you get cold, take a taste.

There are two Christmas market staples sold at this marché de Noël, staples that you’ll find at most of the markets, but because there is no covered portion at the Champs-Elysées, you’ll probably find them far more necessary here than you will elsewhere: roasted chestnuts and mulled wine.

La Défense is the French financial and business district, and under normal circumstances, a visitor to Paris would have no reason to venture quite so far from the city center. But La Défense is also home to one of Paris’ best Christmas markets, boasting a covered section in the center selling foods of all kinds called le village des saveurs or the village of flavors.

Without fail, every time I bring someone to the Montmartre Christmas market, they start out disappointed. That’s because there is a very small market at Abbesses métro that is charming but diminutive; the true market is up at the top of the hill, in front of the Sacré Coeur basilica.

What’s your favorite Paris Christmas market? Tell us below!