Dining in France: 5 Helpful Tips For the Best Experience 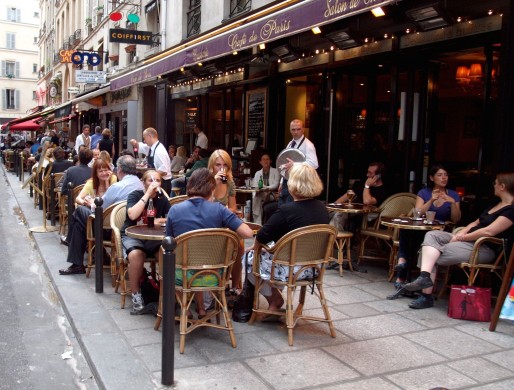 5 Tips for Dining in France

Dining in France: Choosing a Type of Restaurant

One of the first things to bear in mind when choosing a restaurant in France is that not all restaurants are created equal. Differences exist between restaurants, cafés, brasseries and bistros, so be sure that you know what you want before you sit down!

Ordering in France, as in many places, usually starts with drinks.

When it comes to ordering food, you’ll likely have quite a bit of choice as well.

Once you’ve placed your order — or sometimes before! — your apéritif will arrive. This is occasionally accompanied by a small snack, which may be chips or nuts or even a spread of some kind served with bread, called an amuse bouche. If you did not order an apéritif, you likely won’t see anything to eat on your table until your appetizer. In other words… no bread.

You will see bread when your food arrives or a bit before. Eating bread before you begin eating your food is seen as bad form, as the bread is meant to accompany the food, not serve as a second amuse bouche. Because the bread accompanies the food, you will very rarely see butter served with the bread, unless you’re eating breakfast or are eating at a very touristy restaurant.

France has become much more accommodating to food allergies in recent years, but you may still have a hard time in some places, particularly outside of Paris. One of the best ways to make a food allergy known is to print cards with the following phrase on them and show them to your waiter:

The sentence translates to:

Also be aware that vegetarianism and veganism are not as widespread in France as in many other countries, and some people do not understand what is implied by the terms. If you are vegetarian, some restaurateurs will assume you eat fish or even poultry; for vegans, some may assume that you do not eat eggs or dairy, but not that you avoid both. In order to be clear, print up allergy cards specifying all of the foods that you do not eat and show them to the waiter, as you would if you had an allergy.

Unlike in an American restaurant, you will not receive your bill once dessert has been cleared. You are permitted to stay as long as you like, and French people would interpret the bill being set down as being rushed out of the restaurant. When you want to pay, you will have to ask; the aloofness that many visitors to France interpret as rudeness is truthfully the waiter’s attempt to allow you to finish your meal, coffee or conversation in peace.