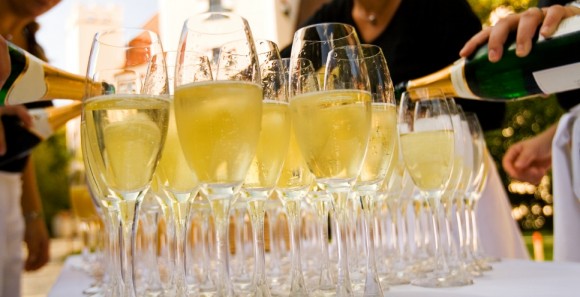 To help introduce French white wines and champagnes, the French Embassy on October 4 hosted a Taste of France showcase of wine, spirits and fine foods, with informative cultural and travel highlights also featured. The presenters were very knowledgeable, patiently answering queries from experts and novices alike. They represented a range of fine restaurants and wine dealers.

At $75 for French Wine Society members and $85 for nonmembers it was not an inexpensive event. But compared with comparable events in Washington and its region, which too often have become formulaic, featuring a lower entry fee, huge crowds, lukewarm entry level wines, and standard cheeses, this was another world entirely.

It was evident from the beginning that it would not be possible to sample everything. And so choices presented themselves. I had a look around the presentation rooms, and made a checklist of wines and sample foods that I really didn’t want to miss. You may want to try that technique. For example, see what white wines to taste before beginning the heavier red wines.

I decided to sample largely champagnes and white still wines, first eying a robust red Chateauneuf du Pape to go with my browsing luncheon, paté de campagne from Dartagnan, the fine producer of quality foods made in America, and inspired by the family’s native Gascony. No surprise there – the paté de campagne and French bread were excellent, as was the sampling of high quality cheeses from The Cheeses of France. From the platter of choice cheeses offered, I had a Loire Valley Chèvre, a Camembert from Normandy, and a delicious Mimolette from the Pas de Calais, a sort of robust cheddar with lingering nutty flavors.

The wine I sipped was a Domaine du Vieux Lazaret Châteauneuf du Pape Rouge 2006 (sale price $31.99). It went very well with the rough paté de campagne. The Vieux Lazaret Châteauneuf du Pape Blanc 2007 (sale price $33.99) was crisp, and less creamy than some other white Châteauneufs. It was clear and refreshing. The Michel Magnien et Fils “Très Girard” Morey-St-Denis, from the outstanding 2005 vintage (sale price $41.99), was a potentially deep wine, which needs to settle down and age for a dozen years. The potential is clearly there.

The Remy Cointreau brand was distinctively represented. The presenter asked what style of champagne I preferred, and I answered that I liked a fuller blend.

My next column will consider the Rémy Martin cognacs, which were the subject of a special seminar. The Cointreau Noir (sale price $57.95) was excellent, assertive, full and flavorful, and less sweet than the original Cointreau.

I tasted more champagnes offered by Vranken Pommery America. As several of these were also named Heidsieck, I asked how this had come about, and was told a rather complicated and very French tale of complex family history, which I cannot possibly remember in its Balzacian intrigue, the upshot being that there are in fact three firms with a claim to the Heidsieck name.

There was a good assortment of Lucien Albrecht Alsatian wines.

Louis Jadot from the Kobrand Corporation had several selections available.

Louis Latour Grand Ardeche is a good, basic value unoaked white wine (sale price $10.99), one of those staple and inexpensive good quality French wines that you can buy with confidence.