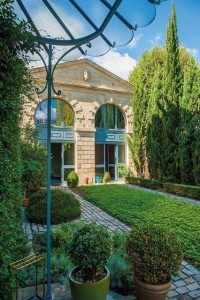 Pierre Lurton probably has one of the most envied jobs in in the wine world–he is President of two of Bordeaux’s top properties: Cheval Blanc, First growth of Saint Emilion and Château d’Yquem, first growth Superior of Sauternes, the top dog of the 1855 classification in Sauternes.

As if this wasn’t enough to keep him busy, along with making wines all over the world for the LVMH stable and on his own property Château Marjosse in the Entre deux Mers, he has recently purchased the successful town center bed and breakfast ‘La Maison Bord’Eaux’.

La Maison Bord’Eaux was already a funky town center address for those in the know in an 18th century ‘hotel particulier’ created around a stable and courtyard. Pierre has now modernized the restaurant and added a few rooms making it into Bordeaux‘s only Boutique hotel that really merits the name.

The nine bedrooms include one with a terrific terrace with a view over the city center and the remains of the Roman arena. Although the restaurant is not open to the public manager, Thierrry Bonnet and his wife offer a service of seasonal dishes for residents upon reservation. As you can imagine the small private wine bar has an excellent selection of wines made by the owner and other members of the Lurton family, one of the largest families covering most of the appellations throughout Bordeaux and around the world.

Will you plan a trip to La Maison Bord’eaux? Where do you like to stay while in Bordeaux? Let us know below!