What Makes a Super Tuscan? Uniqueness and Style 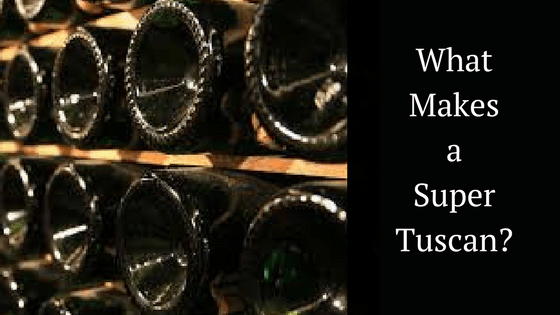 What makes a Super Tuscan “Super”?

Using “super” as an adjective, as in super smart, is super common in everyday writing and conversation. There’s data to support this notion. The Corpus of Contemporary American English database analyzed the use of “super” in spoken and written word. Use started increasing in the 1930s. It took off in the 1970s, and surged by 500% into commonplace status from 1994 to 2012.  The term Super Tuscan was way ahead of this curve. It was coined in the early 1980s before “super” became super cool. So what is a Super Tuscan and what makes it so special?

The evolution of Super Tuscan wines reveals the culture of modern Italian wine growing. Italy experienced a long era when politics and economics almost destroyed the wine industry. Italy’s flight to quality surged in 1963 with a new appellation system, called Denominazione di Origine Controllata (DOC), patterned after France.
Not everyone was happy about the regulatory limitations, then or now. In Chianti, DOC red wine production was limited to Sangiovese plus a few minor native blending grapes. Many winemakers felt that the Chianti region would be doomed to produce inferior quality wine.
Marchese Mario Incisa della Rochetta, whose Bolgheri estate is run today by son Nicoló, became frustrated with the new rules. He saw the growing global popularity of international red varieties such as Cabernet Sauvignon and Cabernet Franc – a style he loved, and had planted in the 1940s. The terroir of Bolgheri is similar to Bordeaux, perfectly suited to growing quality international varieties (but not necessarily Sangiovese). In a bold move, the Marquis hired famous enologist Giacomo Tachis. The first commercial vintage of Sassicaia was born in 1968. It was made outside the regulations, without Sangiovese. It wasn’t called Super Tuscan. It had to be labeled “table wine” (vini da tavola).
Sassicaia opened the door for other winemakers. Most notable of these was the Marchis’ cousin Piero Antinori. He introduced Tignanello in 1971. It is widely considered to be the first real Super Tuscan because it blended native Sangiovese with international Cabernet Sauvignon. Tignanello still had to be classified as table wine. Despite the fact that the price rivaled quality offerings such as Brunello di Montalcino and Barolo.
Reception was understandably cool in Italy. Yet, these unique new wines soon began to enjoy great success in foreign markets. American wine critic Robert Parker is widely credited with inventing the term Super Tuscan. By 1992, it was clear to winemakers and regulators that they had to reach a compromise. If the wines were substantially better than table wines, but not capable of meeting the delimitation of the quality appellation, then what? A new category called Indicazione Geografica Tipica (IGT) was created to limit manage quality and convey the typicity of the region. The highest quality level, Denominazione di Origine Controllata e Guarantita or DOCG, was also introduced in 1992.
Sassicaia continued to use the table wine designation until 1994 when the existing Bolgheri DOC (est. 1983) was modified to include the prestigious wine in a sub-zone. This was formalized in 2013 by establishing Bolgheri Sassicaia DOC. It is the only case in Italy of an appellation being granted to a single estate.
Today a Super Tuscan wine comes in many styles ranging from 100% Sangiovese, to blends of Sangiovese with international varieties, to Italian versions of the classic Bordeaux blend using on international varieties (primarily Cabernet Sauvignon, Cabernet Franc, and Merlot). Syrah is also used. On the label, a Super Tuscan will generally say “Toscana IGT” or “Bolgheri DOC.” Many Super Tuscans, including Tignonello and Sassicaia, are named (branded). Instead of the grape or region, the name is displayed prominently on the label.
Recently, three trends are working against Super Tuscans in today’s global market:

Want to learn more about Tuscany and Super Tuscans? Check out our Italy Wine Tours page.

In 1981, Ornellaia (an estate featured on our Treasures of Tuscany and Piedmont tour) was founded by Marchese Lodovico Antinori. The first vintage (1985) was released in 1988. In 1999, the Antinoris partnered with legendary American winemaker Robert Mondavi. In rapid succession, Mondavi took full control of the winery in 2002 and transferred 50% to Marchesi de’ Frescobaldi. In 2005, when the Mondavi enterprise was sold to Constellation Brands, the Frescobaldi family took 100% control of Ornellaia. Winemaker Axel Heinz has worked with the Frescobaldis since 2005. With 700 plus years of history in the Tuscan wine industry, the Frescobaldi family also owns six other estates:
Along with several other winery properties.
The property’s flagship wine is simply called “Ornellaia.” It is a red cuvée of Cabernet Sauvignon, Merlot, Cabernet Franc, and Petit Verdot. Other wines in the Ornellaia portfolio include:

As you can see, Super Tuscans are varied with a style all their own, and definitely worth the time to explore!