Bordeaux Twin Vintages: Some of the Finest Years

It all began in the distant past, the 1899 Bordeaux vintage. It had been a very hot summer, and the wine produced was excellent, the best within the memory of many lovers of fine Bordeaux. The following year, a sort of wine miracle took place, for the 1900 vintage followed what today would be termed a perfect growing season, with fine flowering, warm weather, and a sufficiency of rain. In Margaux the vintage was particularly successful, and the 1900 Chateau Margaux is still spoken of, by those who were lucky enough to taste it, as a superb wine – certainly the wine of the vintage, if not of the entire fading century!

There is a modern echo to this, for in a dinner party hosted by the Earl of Grantham (Hugh Bonneville) in television’s Downton Abbey, set in the early years of the twentieth century, Lord Grantham is pleased when a guest recognizes the 1900 Margaux that is served in her honor! But the 1899 and 1900 vintages did more than please those who savored them – they also ushered in the notion of fine Bordeaux twin vintages! The celebration of fine vintages always owes a lot to winemaker skill, but in those early days, overcoming the odds of weather and boosting demand for fine wines (and their prices) two years in a row must have seemed nearly miraculous.

We now speak of twin vintages, but that is not really accurate, for it implies two consecutive vintages that resemble each other greatly. What is really intended is two excellent vintages in a row, with successes that are memorable, but not necessarily consecutive. For example, in fine twin vintages, a great success in Pauillac or St. Emilion may be followed by one in which Margaux and Pomerol was more successful. And so, look beyond the “twin” hyperbole, to find where good values and excellent quality may be found. 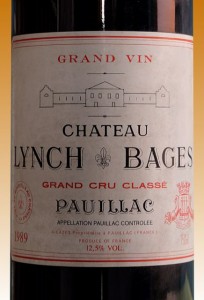 And there is something to remember about vintages, twin or otherwise. An excellent vintage is fine not just for great growth wines, but for every wine property happily situated within the region. I wouldn’t be surprised if in some instances, second wines approached in quality the grand vins of lesser vintage years. And so the discriminating wine lover, by casting a wider glance at wine purchased, may find some comparative bargains in such excellent years. In twin vintages, as happened in 1982, there may be some price adjustments when the next (and competing) twin vintage is offered for sale.

Vintages that are considered excellent are soon priced accordingly (with the second “twin” year usually priced lower at its issuance). But remember, your own taste preference and that of a wine writer may be quite different. For example, the 1982 and 1983 Chateau Figeac are justly praised. However, I prefer a somewhat leaner Bordeaux (in wine speak, a “classic” vintage), and therefore have always savored the 1981 vintage for Chateau Figeac. As a bonus, it was always priced far lower than its siblings.

If you have had the pleasure of visiting the wine property, then please share the winemaker’s insights on the vintages. It will add to your pleasure, and that of your lucky guest tasters!